While painstakingly drafting Wide Sargasso Sea, the novel many would consider to be her masterpiece, Jean Rhys turned on the radio to hear herself being described as a “forgotten dead writer” by an eminent critic. Rhys had to call up the BBC and inform them that she was, in fact, alive, and writing, and would prefer it if the literary establishment would stop assuming she was dead.

We can learn much about Rhys’ life through the brilliant modernist novels she wrote while living in Paris and London – Quartet, After Leaving Mr Mackenzie, Voyage in the Dark and Good Morning Midnight. Let’s start with Voyage in the Dark which, although published later, was her first full-length novel. She wrote it aged just nineteen.

Voyage in the Dark really is an extraordinary work – especially when you consider how young Rhys was when she wrote it. Loosely based on her own life, it tells the story of Anna who has come from the Caribbean to London and is horrified by the coldness and the darkness of the country. It’s a novel about the immigrant experience, about being an outsider. But it’s also a novel about the power imbalances between men and women, and about abortion – written fifty years before the procedure became legal in the UK.

What I love about Voyage in the Dark is its searing honesty about female loneliness, despair and longing for a better life while feeling so trapped by poverty and hopelessness. At one point, Anna moans aloud: “My god I’m nineteen and I have to go on living and living and living.” I too was nineteen when I read this cry from the heart.

Voyage in the Dark may have been the first novel she wrote, but Quartet was the first novel Rhys published. Written in Paris, it tells the story of the love triangle she endured with Ford Madox Ford and his partner, Stella Bowen. Again, its power lies in its desperately honest portrayal of imbalances of power – power between men and women, rich and poor, “acceptable” and “unacceptable”. These themes crop up again and again in Rhys’s work: in her next novel After Leaving Mr Mackenzie, her short stories such as Let them call it jazz, and, perhaps most heart-achingly of all, in Good Morning Midnight which tells the story of a woman approaching middle-age and living alone in a dingy Paris hotel.

Like most of her novels, Good Morning Midnight cleverly focuses on how women use clothes and make-up as crutches to their identity. The protagonist Sasha spends ages choosing a hat and deciding which colour to dye her hair. Anna in Voyage in the Dark is angry that she can’t afford nice clothes, and Julia in After Leaving Mr Mackenzie is painstaking about applying her make-up. These two things crop up again and again in her novels – as does the close detail Rhys pays to colours and fabrics. She understands how clothes and make-up construct identity in a world women are constantly on display – both to admiring and disgusted looks.

After Good Morning Midnight, Rhys disappeared from the literary scene for 20 years. Until, in fact, that radio programme and the subsequent announcement that she was working on a new novel about Charlotte Bronte’s madwoman in the attic. Rhys was full of ambition to re-tell Bertha’s story – to give the monstrous first wife a chance to be heard, and to tell a story about the Creole woman’s experience which she felt had not really been told before.

The result, Wide Sargasso Sea, is remarkable. Written in part in Antoinette’s voice and in part in her husband’s voice (she never names him as Rochester), it’s a beautiful and angry novel that refuses to shy away from issues of colonialism, race and gender. Her lush descriptions of the unnamed Caribbean island (based on Dominica) are rich and overpowering, as is the violence of emotion and sexuality that leaps out from every page.

One of my favourite passages from the novel refers to the husband changing Antoinette’s name: “I like Bertha. I like to think of you as Bertha.” To me, this has always been a sentence about colonialism as Antoinette accuses him of “changing my name and that’s a kind of obeah too.” The act of a white man travelling to the Caribbean and renaming his “property” according to his preference is a powerful and unforgettable image.

Rhys was a ferocious editor and famously was unsatisfied with the final (and very delayed) publication of Wide Sargasso Sea because she felt it had two unnecessary words in it. From Quartet to Wide Sargasso Sea and all her short stories, the tightness and sparseness of her prose is astonishing. There is never a wasted word on the page, never an extraneous phrase. She honed and honed her text with such dedicated skill.

I first discovered Rhys as an undergraduate living in London, studying two streets away from where Voyage in the Dark’s Anna waited for her lover to bring her a bottle of wine and leave money on her dresser. I was instantly hooked at these short novels about female desperation and loneliness and promptly went on to devour every other work of hers I could find. I actually feel jealous of someone reading Anna’s terrifying narrative for the first time. But I am glad that I can go back to these novels again and again – that the writer who recorded the lives of women who fell through the cracks never totally disappeared into the cracks herself.

©The Heroine Collective 2016 – Present, All Rights Reserved.  Every effort is made to ensure our articles are as accurate as they can possibly can be, but if you notice a factual error, please do be in touch. We only use images we believe are either in the public domain or images we believe we are able to use for illustrative, editorial and non-commercial purposes. If you believe one of our images is being used incorrectly, please be in touch. References include Shari Benstock’s Women of the Left Bank and Andrea Weiss’ Paris was a Woman, and Jean Rhys’ work as referenced.

Sian Norris is a writer and feminist activist. She is the founder and director of the Bristol Women's Literature Festival, and runs the feminist blog sianandcrookedrib.blogspot.com. She has written for the Guardian, the Independent, the New Statesman. Her first novel, 'Greta and Boris: A Daring Rescue' is published by Our Street and her short story 'The Boys on the Bus' is available on Kindle. Sian is working on a novel based on the life of Gertrude Stein. 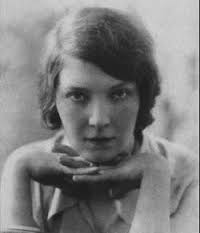